In the realm of fairy tales and myths. Illustrations by Alexander Zick

In the realm of fairy tales and myths. Illustrations by Alexander Zick

The artist Alexander Zick (1845-1907) from Koblenz was the great-grandson of Januarius Zick and was trained as a painter and sculptor at the art academy in Dusseldorf. However, afterwards he appears primarily as illustrator. The gallery exhibition preludes and complements the Brentano colloquium 2013 (28 – 29 September 2013), which is entitle “A Romanticist in Europe”. To mark the occasion, the Middle-Rhine Museum will show fairy-tale illustrations by Zick, including works that directly refer to fairy tales by Clemens Brentano. 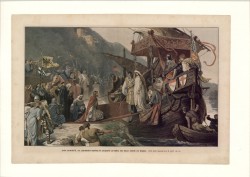